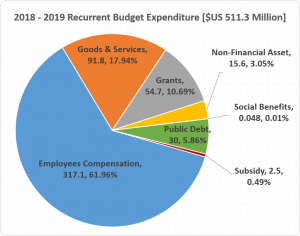 The Liberian National Budget contains the annual estimates of revenue and allocations of government funds. It is prepared by the Executive Branch, specifically the Ministry of Finance and Development Planning, and approved by the Legislature for the fiscal year from July 1st to June 30th. The Ministry’s Department of Budget and Development Planning is charged with preparing, executing and monitoring the national budget.

Management of all public funds for the nation are governed by the Public Finance Management Act of 2009. The Act applies to all branches of the government, and covers all agencies, entities and institutions. Its core principles include accountability of public finances, an annual and balanced budget, the specific and comprehensive details of revenues and expenditures, as well as transparency of the budget process and appropriations.

The Act also requires that the National Budget is created in the context of a medium-term development time frame. This Medium Term Expenditure Framework defines national objectives over a multi-year period, and the budget for a given period should be designed towards the goals of said time frame.

As a member of the Open Government Partnership which was launched in 2011 for open, accountable and responsible governance, Liberia launched its Open Budget Initiative in 2013. This transparent budget process aims to promote openness in government spending and financial information.

The President of Liberia has the highest responsibility for all policies pertaining to the nation’s finances and the National Budget. He/she takes the necessary actions to perform these obligations. The Minister of Finance is charged with the technical details and implementation of the budget. He/she manages the budget preparation and oversees funding allocation for achieving national goals within the Medium Term Expenditure Framework.