The Republic of Liberia is a small country located in the bulge of the West African Coast. It is bordered by Sierra Leone, Guinea, the Ivory Coast and the Atlantic Ocean. This land is rich in resources like iron ore, timber and rubber. It has vast vegetation and contains approximately 42% of the Upper Guinea Forest.

Due to numerous decades of government mismanagement and a 14-year civil war, Liberia remains underdeveloped. It relies on foreign aid, and about 64% of its people live in poverty.

Note: The 2nd and 3rd groups are commonly called Congo

Age Structure
Data from 2017 est. showing population by age range. Over half of the Liberian population is made up of children and young adults, making the dependency ratio very high. 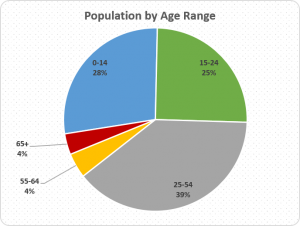 Following the civil war, the Liberian economy grew with average GDP growth at about 8% during some periods. Nevertheless, this growth was insufficient to lift Liberia from a low-income status and provide opportunities for a majority of its citizens. The nation still depends on foreign aid and many citizens rely on money transfers from abroad.

The Liberian government, from one administration to the next, has been laden with greed, corruption, nepotism, and other actions that enrich its leaders instead of developing the country and its people. Often, a huge portion of the national budget (about 62% for 2018-2019), is allocated towards paying government employees, leaving little funding for other services and development projects.

In addition, factors like the Ebola outbreak, UN peacekeepers and other relief agencies’ withdrawal, and the reduction of the prices of Liberia’s exports has the nation in a dire economic situation. The withdrawal of these agencies greatly reduced the amount of foreign capital coming into the country and left many Liberians unemployed. Liberia also has a dual currency system with the US and Liberian dollar in circulation.

A majority of Liberia lacks electricity, running water, adequate roads and means of transportation and reliable healthcare. It also lack a robust school system, basic nutrition, and many other provisions, facilities, and amenities that would improve the livelihood of its citizens.

Airports
29 (only 2 have paved runways)

The Judiciary. Republic of Liberia. Web.

The Legislature. Republic of Liberia. Web.