By Aaron Ireland and PM Gargard

Developmental reform laws, policies and programs have failed to protect and address the needs of women, youth and children in post-war Liberia. In spite of being noted for Africa’s first elected female president, a cabinet ministry dedicated to Gender (women), Children, and Social Protection, as well as 174 years as an independent nation, women and children in Liberia continue to be at high risk of domestic and sexual violence.

Some forms of sexual violence that are prevalent in Liberian communities and schools include sexual exploitation, sexual harassment, bullying, and rape. In some schools, both students and teachers are being threatened to have sex for grades, or offered grades for sex. The UN has found that at least ONE IN THREE women will experience physical or sexual violence in her lifetime. Liberia is no exception with 40% of women reporting at least one instance of sexual violence.

It was only after countless cases of public outcry between 2002 and 2005, that Chapter 14 Section 7 of the Penal Law of Liberia was amended in 2005 to specifically indicate that statutory rape was a first degree felony, a non-billable offense punishable by life imprisonment.

The hope that many people had was that the amended law, due to its harsh terms, would make many people not even think about committing this (rape) crime, but now more than ever before, rapists are on the rampage and going not just after every age group of teenagers, but little babes including nine months old have recently been raped in Liberia.

The list below highlights some of the stories on sexual and domestic violence mostly against young girls reported by the media in the past few years. Click the red bar to view the list.

There has been some progress over the years with the change in the Penal Law and more reporting of rape to the authorities, but not enough to curb the alarming numbers of assault and domestic violence in many schools and communities. The past two years have seen multiple calls for tougher laws including the death penalty against perpetrators, and protection for likely victims. Additionally, in September 2020, President Weah declared a national emergency on rape. However, there has not been a major change in the reports on rape in Liberia.

The United Nations is one of the institutions working to end rape and other violence against women and children in Liberia. Since 1991, the UN holds an annual event from November 25 to December 10 as 16 days of activism. The theme of the 2021 days of activism was “Orange the World; End violence now.” Through the United Nations Industrial Development Organization (UNIDO), the UN partners with Youth Advocate Aaron Ireland to facilitate training and awareness in combating these issues in local communities. The goal of this program is to engage with local community and school administrators, as well as residents in the fight to eliminate violence from their communities.

It is important to note that the United Nations has also had its share of sexual abuse scandals involving children. In Liberia, Cambodia, DR Congo and other countries, UN peacekeepers and Aid Workers have sexually exploited and raped children, and many offenders have gone without any consequences. See the related links for some of these stories.
UN peacekeepers in Liberia child sex scandal
Transcript of UN Sex Abuse Scandal

This year’s activities to end such violence were implemented in Lofa, Margibi and Montserrado counties, since UNIDO is also carrying out its Technical and Vocational Education and Training (TVET) in these counties. A school or two, as well as a radio station were visited to engage citizens and educate them about rape and violence prevention. Below is a list of the locations, schools, and radio stations that participated in the program, and photos from some of the events. 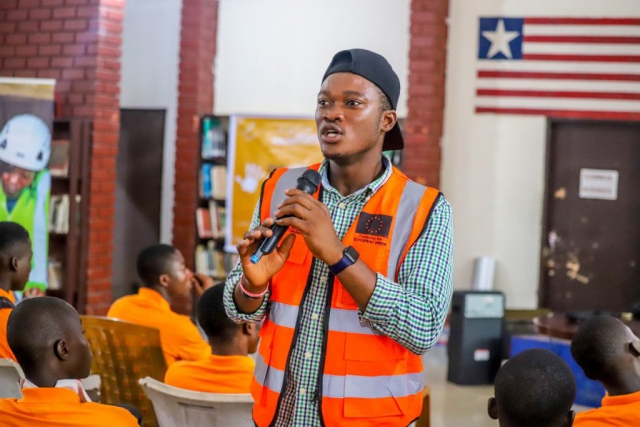 Liberia’s major problem is a lack of effective law enforcement and judicial system. This affects multiple issues and sectors in Liberia and hinders progress at various levels. With perpetrators still getting away and not facing harsher punishments in cases of sexual and domestic violence, women and children remain at risk in the Liberian society.