THE DECLARATION OF INDEPENDENCE

A Declaration of Independence by the Representatives of the People of the Commonwealth of Liberia in Convention Assembled. July 26, 1847.

We, the representatives of the people of the commonwealth of Liberia, in Convention Assembled, invested with the authority of forming a new government, relying upon the aid and protection of the Great Arbiter of human events, do hereby in the name and on behalf of the people of this Commonwealth, publish and declare the said Commonwealth a FREE, SOVEREIGN AND INDEPENDENT STATE, by the name and title of the REPUBLIC OF LIBERIA.

While announcing to the nations of the world the new position which the people of this Republic have felt themselves called upon to assume, courtesy to their opinion seems to demand a brief accompanying statement of the causes which induced them, first to expatriate themselves from the land of their nativity and to form settlements on this barbarous coast, and now to organize their government by the assumption of a sovereign and independent character. Therefore, we respectfully ask their attention to the following facts:

We recognize in all men certain inalienable rights; among these are life, liberty, and the rights to acquire, possess, enjoy, and defend property. By the practice and consent of men in all ages, some system or form of government is proved to be necessary to exercise, enjoy, and secure their rights, and every people have a right to institute a government, and to choose and adopt that system, or form of it, which in their opinion will most effectively accomplish these objects, and secure their happiness, which does not interfere with the just rights of others. The right, therefore, to institute government and powers necessary to conduct it is an inalienable right and cannot be resisted without the grossest injustice.

We the people of the Republic of Liberia, were originally inhabitants of the United States of North America.

In some parts of that country, we were debarred by law from all rights and privileges of men – in other parts, public sentiment, more powerful than law, frowned us down.

We were everywhere shut out from all civil office.

We were excluded from all participation in the government.

We were taxed without our consent.

We were compelled to contribute to the resources of a country which gave us no protection.

We were made a separate and distinct class, and against us every avenue of improvement was effectively closed. Strangers from other lands, of a color different from ours, were preferred before us.

We uttered our complaints, but they were unattended to, or only met by alleging the peculiar institutions of the country.

All hope of a favorable change in our country was thus wholly extinguished in our bosoms, and we looked with anxiety for some asylum from the deep degradation.

The Western coast of Africa was the place selected by American benevolence and philanthropy for our future home. Removed beyond those influences which oppressed us in our native land, it was hoped we would be enabled to enjoy those rights and privileges and exercise and improve those faculties which the God of nature has given us in common with the rest of mankind.

Under the auspices of the American Colonization Society, we established ourselves here, on land, acquired by purchase from the lords of the soil.

In an original compact with this society, we, for important reasons, delegated to it certain political powers; while this institution stipulated that whenever the people should become capable of conducting the government, or whenever the people should desire it, this institution would resign the delegated power, peacefully withdraw its supervision, and leave the people to the government of themselves.

Under the auspices and guidance of this institution which has nobly and in perfect faith redeemed its pledge to the people, we have grown and prospered.

From time to time our number has been increased by immigration from America, and by accession from native tribes; and from time to time, as circumstances required it, we have extended our borders by the acquisition of land by honorable purchase from the natives of the country.

As our territory has extended and our population increased our commerce has also increased. The flags of most civilized nations of the earth float in our harbors, and their merchants are opening an honorable and profitable trade. Until recently, these visits have been of a uniformly harmonious character; but as they have become more frequent and to more numerous points of our extended coast, questions have arisen which, it is supposed, can be adjusted only by agreement between sovereign powers.

For years past, the American Colonization Society has virtually withdrawn from all direct and active part in the administration of the government, except in the appointment of the governor, who is also a colonist, for the apparent purpose of testing the ability of the people to conduct the affairs of government, and no complaint of crude legislation, nor of mismanagement, nor of maladministration has yet been heard.

In view of these facts, this institution, the American Colonization Society, with that good faith which has uniformly marked all its dealings with us did by a set of resolutions in January, in the year of our Lord one thousand eight hundred and forty-six, dissolve all political connections with the people of this Republic, returned the power with which it was delegated, and left the people to the government of themselves.

The people of the Republic of Liberia, they, are of right, and in fact, a free, sovereign, and independent state, possessed of all the rights, powers, and functions of government.

In assuming the momentous responsibilities of the position they have taken, the people of this republic feel justified by the necessities of the case, and with this conviction they throw themselves with confidence upon the candid consideration of the civilization of the world.

Liberia is not the offspring of gasping ambition, nor the tool of avaricious speculation.

No desire for territorial aggrandizement brought us to these shores; nor do we believe so sordid a motive entered into the high consideration of those who aided us in providing this asylum.

Liberia is an asylum from the most grinding oppression.

In coming to the shores of Africa, we indulged the pleasing hope that we would be permitted to exercise and improve those faculties which impart to man his dignity; to nourish in our hearts the flame of honorable ambition; to cherish and indulge these aspirations which a beneficent Creator had implanted in every human heart, and to evince to all who despise, ridicule, and oppress our race that we possess with them a common nature; are with them susceptible of equal refinement, and capable to equal advancement in all that adorns and dignifies man.

We were animated by the hope that here we should be at liberty to train up our children in the way that they should go; to inspire them with the love of an honorable fame; to kindle within them the flame of a lofty philanthropy, and to form strongly within them the principles of humanity, virtue, and religion.

Amongst the strongest motives to leave our native land – to abandon forever the scenes of our childhood and to sever the most endeared connections – was the desire for a retreat where, free from the agitation of fear and molestation, we could approach in worship the God of our fathers.

Thus far our highest hopes have been realized.

Liberia is already the happy home of thousands, who were once the doomed victims of oppressions; and if left unmolested to go on with her natural and spontaneous growth, if her movements be left free from the paralyzing intrigues of jealous ambition and unscrupulous avarice, she will throw open wider and yet a wider door for thousands who are now looking with an anxious eye for some land of rest.

Our courts of justices are open equally to the stranger and the citizen for the redress of grievances, for the remedy of injuries, and for the punishment of crime.

Our numerous and well-attended schools attest our efforts and our desire for the improvement of our children.

Our churches for the worship of our Creator, everywhere to be seen, bear testimony to our piety, and to our acknowledgment of His Providence.

The native African bowing down with us before the altar of the living God, declares that from us, feeble as we are, the light of Christianity has gone forth, while upon that curse of curses, the slave trade, a deadly blight has fallen, as far as our influence extends.

Therefore, in the name of humanity, virtue, and religion, in the name of the great God, our common Creator, we appeal to the nations of Christendom, and earnestly and respectfully ask of them that they will regard us with the sympathy and friendly considerations to which the peculiarities of our condition entitles us, and to that comity which marks the friendly intercourse of civilized and independent communities.

Done in Convention, at Monrovia, in the county of Montserrado, by the unanimous consent of the people of the commonwealth of Liberia, this twenty-sixth day of July, in the Year of Our Lord One Thousand Eight Hundred and Forty-seven : In witness whereof we have hereto set our names. 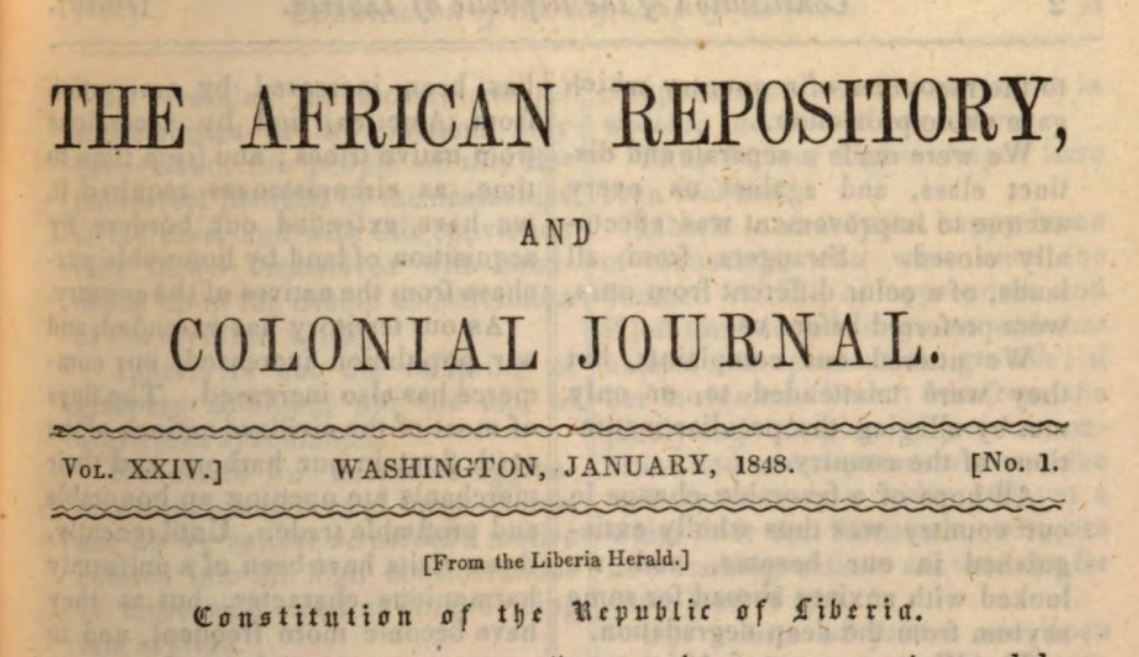 By late 1845, economic reasons had officials of the Commonwealth considering independence and being in total control of the affairs of Liberia. They met on October 7, 1846 to discuss the implications of an independent nation. A majority of the settlers favored independence from the ACS and the Constitutional Convention to declare Liberia's statehood began on June 25, 1847. Representatives of the Commonwealth of Liberia and the ACS gathered in Monrovia for the convention. The Declaration of Independence and Constitution were adopted on July 26, 1847, making Liberia, Africa's first independent nation and the world's 44th. Liberia gained her independence neither from a colonial master nor by bloodshed. It was a peaceful transition from the Commonwealth to the Republic of Liberia. Read More...