CONSTITUTION FOR THE GOVERNMENT OF THE AFRICAN COLONY AT LIBERIA

All persons born within the limits of the territory held by the American Colonization Society, in Liberia, in Africa, or removing there to reside, shall be free, and entitled to all such rights and privileges, as are enjoyed by the citizens of the United States.

The Society’s Agents shall compose a board, to determine all questions relative to the government of the Settlement, shall decide all disputes between individuals, and shall exercise all judicial powers, except such as they shall delegate to justices of the peace.

The Agents shall appoint all officers not appointed by the managers, necessary for the good order and government of the settlement.

There shall be no slavery in the settlement.

The common law, as in force and modified in the United States, and applicable to the situation of the people, shall be in force in the settlement.

Every settler coming to the age of twenty-one years, and those now of age, shall take oath or affirmation, to support this Constitution.

In case of necessity, where no rule has been made by the Board of Managers, the agents are authorized to make the necessary rules and regulations, of which they shall, by the first opportunity, inform the board, for their approbation; and they shall continue to be in force, until the board shall send out their decision upon them.

This Constitution is not to interfere with the jurisdiction, rights and claims of the United States, over the captured Africans and others, under their care and control, so long as they shall reside within the limits of the settlement.

Constitution, Government and Digest of the Laws of Liberia : as confirmed and established by the Board of Managers of the American Colonization Society. Washington City: Way & Gideon. 23 May, 1825.

Innes, William. Liberia: Or, the Early History & Signal Preservation of the American Colony of Free Negroes on the Coast of Africa. Edinburgh: Waugh & Innes, 1833. Print.

Van Der Kraaij, Fred. The Historical Importance of the 1824 Constitution. Liberia’s Past and Present. Web.

Wilkeson, Samuel. Concise History of the Commencement, Progress and Present Condition of the American Colonies in Liberia. Washington: 1839. Print. 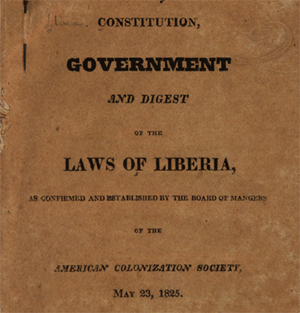 After a few years in the settlement, the agents adopted a plan for a civil government and a digest of laws in August 1824. This plan along with the modified Constitution of 1820 was approved by the Board of Managers of the ACS in May 1825. The constitution now had the location of the settlement as “Liberia”. These laws were meant to govern the settlement, giving the agent sovereign power. The settlement was still subject to the decisions of the ACS Board. The provisions in this constitution and laws applied only to the settlers, excluding the natives and recaptured slaves.